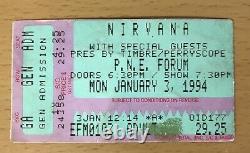 AT THE PACIFIC NATIONAL EXHIBITION FORUM. THIS WOULD BE ONE OF NIRVANA'S.

LAST SHOWS, PRE-DATING KURT'S DEATH. ON APRIL 5, 1994, BY A FEW MONTHS. THIS IS A RARE PIECE OF NIRVANA. MEMORABILIA WITH NOT MUCH ACTUAL. Jesus Wants Me For A Sunbeam.

During the show, Kurt was hit in the head with a coin from the audience. He stopped the song and replied, Somebody just hit me in the head with a Canadian quarter. " With a big grin, he added, "didn't hurt though, then continued with the song. Someone in the crowd kept screaming for the band to play tourette's.

THE TICKET STUB SHOWS WEAR, BUT WOULD LOOK AWESOME. FRAMED WITH PHOTOS OR OTHER MEMORBILIA. This item is in the category "Entertainment Memorabilia\Music Memorabilia\Rock & Pop\Artists N\Nirvana\Concert Memorabilia". The seller is "10secondstolove" and is located in this country: US. This item can be shipped to United States.