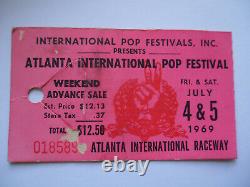 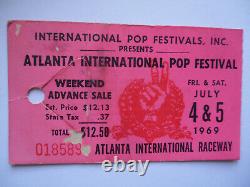 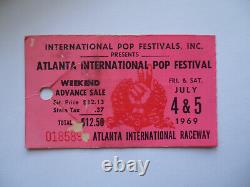 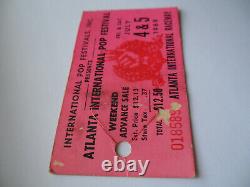 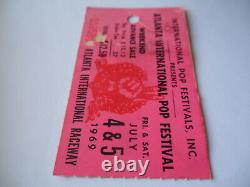 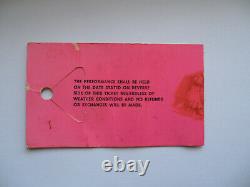 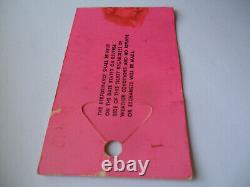 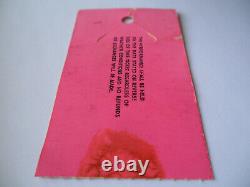 Although this event was about 1/3 the size, it was held 6 weeks before Woodstock. It turned out 1969 would be the peak year for pop festivals, and the success of this one led the promoter to hold the 1970 Atlanta Pop festival the following year. That one would be even more successful and almost on par with Woodstock with an attendance reaching as high as 300,000+. This is why the Atlanta Pop Festival has become one of the most coveted concert festival events and probably stands only 2nd to Woodstock in popularity.

Atlanta had the similar cool vibes and peaceful colorful crowd from that special era. All the news articles about the Atlanta event were very favorable. The young hip crowd was very orderly and there to have a good time. They even showed a very peaceful tolerance as they braved the harsh sun conditions with limited facilities over that weekend. It also turned out to be the largest audience that Led Zeppelin would ever play in front of, until only possibly at Knebworth which wasn't until a full decade later. The stub is the one seen in the photos. It is in nice condition but does show a little wear. Nothing bad at all though and it nicely shows the whole end stub in its entirety, as it was ripped perfectly along the perforation. In original vintage items guaranteed authentic. The first Atlanta International Pop Festival was a rock festival. Held at the Atlanta International Raceway. In Hampton, Georgia, twenty miles south of Atlanta, on the July Fourth. (Friday) weekend, 1969, more than a month before Woodstock. Crowd estimates ranged from the high tens of thousands to as high as 150,000. With temperatures nearing a hundred degrees, local fire departments used fire hoses to create "sprinklers" for the crowd to play in and cool off. It was a peaceful, energetic, hot and loud festival with few (if any) problems other than heat related. Concession stands were woefully inadequate. Attendees frequently stood in line for an hour to get a soft drink.

Over twenty musical acts performed at the event. Delaney and Bonnie and Friends.

The following summer, and the Mar Y Sol Pop Festival. The sound system for the 1969 Atlanta festival was supplied by Hanley Sound of Medford, Massachusetts, and the light show was provided by The Electric Collage of Atlanta. Both of which would return for the second Atlanta Pop Festival. On the Monday following the festival, July 7, the festival promoters gave Atlantas music fans a gift: a free concert in Atlantas Piedmont Park. Featuring Chicago Transit Authority, Delaney & Bonnie & Friends, and Spirit, all of whom had played at the festival, and Grateful Dead. According to the Atlanta Journal and Constitution , the free event was the promoters way of showing their appreciation for the overwhelming success of the festival. Although Alex Cooley has also described their motivation as simple hippie guilt at making a few-thousand-dollar profit. Piedmont Park had by then become the location of regular, free, and often impromptu rock concerts by mostly local Atlanta bands, and, beginning in mid-May of 1969, by Macons new Allman Brothers Band. Please leave me a good positive comment so that I know you received your item and everything is fine, I will reciprocate. Thank you for shopping at ClaudeUSA. The item "1969 ATLANTA POP FESTIVAL Original CONCERT TICKET STUB Led Zeppelin J. Joplin" is in sale since Wednesday, March 31, 2021. This item is in the category "Entertainment Memorabilia\Music Memorabilia\Rock & Pop\Artists L\Led Zeppelin\Concert Memorabilia".

The seller is "claudeusa" and is located in Orlando, Florida. This item can be shipped to United States, all countries in Europe, Japan, Australia, Canada.