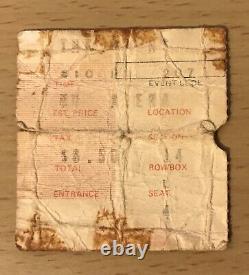 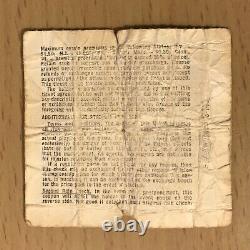 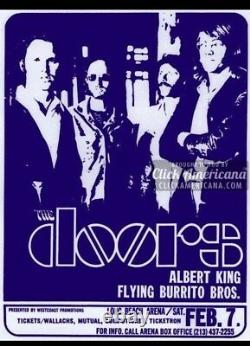 AT THE LONG BEACH ARENA. I HAVE INCLUDED A SAMPLE PICTURE OF THE CONCERT HANDBILL IN MY DESCRIPTION PICTURES. Newspaper: The Long Beach Independent Author: Preston Reese Publish Date: February 9th - 1970. The Doors, musically, were somewhat a jar.

By the time the Doors Jim Morrison mounted the Long Beach Arenas stage Saturday, his audience of 12,000 teenyboppers had already had their young heads blown hither and yon by a series of uppers and downers from the other groups. The Doors, a hard-rock group, first came into attention three years ago with their hit record Light My Fire. More recently the group was publicized when its lead singer, Jim Morrison, was arrested for lewd and lascivious behavior during a Florida concert.

The concert opened with The Flying Burrito Brothers, a group of ex-Byrd members who offered their usual mediocre country-western sampling. Albert Kings hour-long set followed and brought the audience up with doses of blues-rock, but brought them right back down again when he switched to heavy blues, featuring Youre So Mean To Me.

Kings technically excellent band had its own cheering squad in what seemed to have been a 90 percent Doors-fan audience, which showed little response to the harsh, beatless type of blues with which he closed his set. The same empty mood prevailed through most of the Doors part of the concert, too. Morrison was in terrible voice, plodding through most of his songs with no attempt at styling or building climaxes.

Although he prodded the audience several times with, turn out the light! At the top of his voice during When the Musics Over, he couldnt seem to recapture this old Morrison style, which at one time took very little trying, which was part of the style itself. Robby Kriegers guitar carried a half-hour version of Light My Fire, with tight transitions into Summertime and various improvised songs by Morrison, who threw in a choppy harmonica solo, which didnt help the song any, although he was boosted by half the audience, which lighted matches. Morrisons repertoire included all the big ones applause-getters which proved themselves years ago, such as, Soul Kitchen and Alabama Song (Whiskey Bar). Morrison asked: Does anybody have to be home early?

Turn those lights off, man. And then he really got into it, with Love Me Two Times. After the first few lines, Morrison stopped the song when he and guitarist Krieger couldnt get together. THE TICKET STUB SHOW WEAR, BUT WOULD LOOK AWESOME. FRAMED WITH PHOTOS OR OTHER MEMORABILIA.

The item "1970 THE DOORS LONG BEACH CONCERT TICKET STUB JIM MORRISON GRAM PARSON THE END L" is in sale since Wednesday, October 21, 2020. This item is in the category "Entertainment Memorabilia\Music Memorabilia\Rock & Pop\Artists D\Doors\Concert Memorabilia". The seller is "10secondstolove" and is located in Youngstown, Ohio. This item can be shipped to United States.