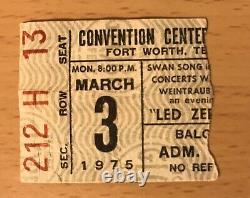 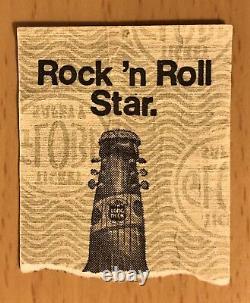 AT THE TARRANT COUNTY CONVENTION CENTER. Rock and Roll, Sick Again, Over the Hills and Far Away, In My Time of Dying, The Song Remains the Same, Rain Song, Kashmir, No Quarter, Trampled Underfoot, Moby Dick, Dazed and Confused, Stairway to Heaven, Whole Lotta Love, Black Dog. Led Zeppelin Flies High, Heavy, Loud. So now, the history-making Led Zeppelin concert series has thundered through Dallas-Fort Worth, breaking gate records here as has been the case of previous stops of the English group's current and chaotic U. Tour, which surely will bring more attendance marks before the March 27 conclusion in Los Angeles.

But still, even as some of that history continues to ring in the ears, the critic's task remains the same, despite the record shattering crowds, or the extended applause for contrived encores of even the overwhelming satisfaction among throngs of loyal Zeppelin fans. ANYONE assuming such apparent signs of success would sway the critic need only refer to an interview with Zeppelin's famed guitarist Jimmy Page and vocalist Robert Plant published in the March 13 issue of Rolling Stone.

Tour (the first in 18 months) is expected to be the largest grossing undertaking in rock history, the band has been continually kicked, shoved, pummeled and kneed in the groin by critics of all stripes. To be sure, audience excitement and anticipation was greater than usual just before the group's concert debut in Dallas on Tuesday night. Zeppelin opened strong and immediately established the well-expected pattern of Page sharing the fronting role with Plant's shrill, penetrating vocals. (Over the Hills and Far Away).

And, of course, the crowd loved it. With a continually superb light snow and stage presentation, Zeppelin raged hours through the evening only rarely straying from the high-stress attack, whether on older tunes ("Black Dog, " "No Quarter, " "Dazed and Confused") or on cuts from their latest album. "Physical Graffiti, " Kashmir, " "In My Dying.

" Finally, their finest work of all, "Stairway To Heaven, brought out the very best from Zeppelin and proved to some extent the group can exert musical expression with subtle finesse, rather than the usual total assault approach. BATES - Dallas Morning News, March 1975. THE TICKET STUB SHOW WEAR, BUT WOULD LOOK AWESOME. FRAMED WITH PHOTOS OR OTHER MEMORABILIA. The item "1975 LED ZEPPELIN FORT WORTH TEXAS CONCERT TICKET STUB ROBERT PLANT JIMMY PAGE" is in sale since Tuesday, February 4, 2020. This item is in the category "Entertainment Memorabilia\Music Memorabilia\Rock & Pop\Artists L\Led Zeppelin\Concert Memorabilia". The seller is "10secondstolove" and is located in Youngstown, Ohio. This item can be shipped to United States.