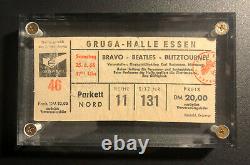 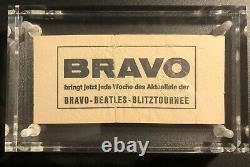 From June 24-26, 1966, the Beatles played three cities in West Germany: Munich, Essen and Hamburg. They performed two shows in each of these cities for a total of six shows -- before heading for Japan and the Philippines. Following their third North American tour in August, their touring days came to an end. The ticket stub offered here is from the second German stop.

At Essens Gruga-Halle on June 25. Its in nice condition, especially considering that the paper is thin fragile and fragile.

It was long ago folded vertically down the center, but had been stored flat for so long that the fold line is not a visual detriment. There is some light ink wear on the left side of the front of the ticket as shown in the photo. There is an embossed stamp on the left side, as well, which appears on all of these tickets. The reverse side features an endorsement for the tour sponsor -- BRAVO, the German teen magazine. Bravo Beatles Blitztournee translates to Bravo Beatles Blitz Tour, a reference to the brevity of the German leg of the tour.

The center crease on this side has minimally affected the printing but, again, not too much of a detriment. Look at the photos and decide for yourself. The ticket is larger than most from back in the day, measuring an impressive 4-7/8 inches by 1-1/4 inches (approximate). This will protect the ticket while its in transit and is also perfect for display purposes in your collection. Tickets to their German shows in 66 are super scarce and seldom come up for sale.

This ticket is a fine example from their very short German tour of 1966. Dont miss this chance to add this to your collection as they dont come along often!

Please take a close look at all the posted photos as they are as much a part of my description as my written words. IF YOU LIVE OUTSIDE OF THE U. If, when you receive an item, there is a problem, please contact me within 3 days to discuss it.

The seller is "mnab52" and is located in Dallas, Texas. This item can be shipped to United States.