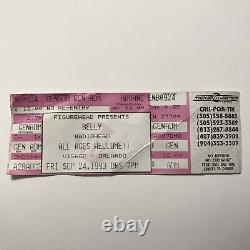 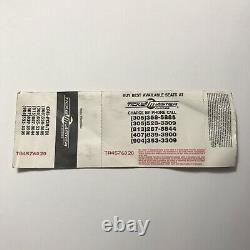 You will be purchasing a vintage 1993, Radiohead / Belly concert ticket stub. In order to list as many as possible we have decided to let our pictures do the talking!

If you have a specific question about this ticket, feel free to ask and we'll help you as soon as possible! Thanks for looking and check out our store as well for many other great items! NOTE: Radiohead officially became Radiohead in 1991 when they signed with EMI records. According to history, they only played around 10 shows in 1991.

When this show happened in 1993, "Creep", had just became a super single launching them into stardom and the band we all know and love today! This show was really for "Belly" and "Radiohead" was just the opening band. They only played 6 songs! Early tickets like this are EXTREMELY rare and are only going up in value. Get it today before someone else does! The item "Belly RADIOHEAD Visage Orlando FL Concert Ticket Stub Vintage September 24 1993" is in sale since Wednesday, October 28, 2020. This item is in the category "Entertainment Memorabilia\Music Memorabilia\Rock & Pop\Artists R\Radiohead".