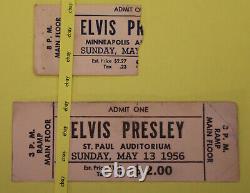 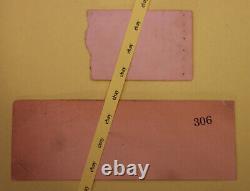 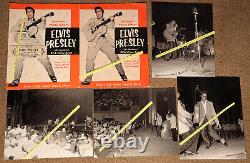 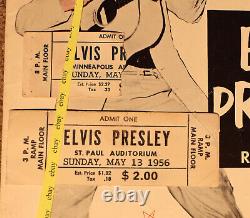 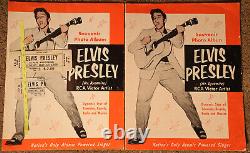 But, folks, I have run into some medical issues that has made me decide to sell a few items from my collection to take care of my health. Included in the coming days is my roadie jumpsuit from Elvis On Tour in 1972, a few stage worn concert scarves, my entire ticket stub collection for every concert Elvis ever did in Minnesota, (which is 9 concerts) and some rare photos and publicity photos. We will start there and see where it goes.

So, here is the listing. He came to Minnesota on Sunday, May 13, 1956 and did a matinee show in St. Paul and then turned around and drove over to the City of Minneapolis to the Minneapolis Auditorium and did another show that night. I also will be including many other items I have been able to download about his appearances here, including some other publicity photos, writings, and stuff you can find on line, but I have been able to have them cleaned up a little so they look so much better. Paul ticket being complete, and the four black and white 8 X 10 photos.

Now, also included are BOTH Mr. Dynamite photo albums or souvenir photo albums as they are named that were distributed in 1956.

These are the orange, black and white Mr. Dynamite, programs issued by RCA Victor.

Now, for those of you that know it, there are two souvenir albums because of a misprint in the first run. Simply put, the first one read" Souvenir Photo Albun" instead of Album. On the back of that misprinted program it simply had a place for Autographs.

Well, when they realized the misprint, they had an additional thought and instead of a blank back for autographs, well, why not advertise your RCA Victor recording artist! So, that's just what they did. They changed the back page to an advertisement. Now, the ticket condition speak for themselves with the photos.

I think with the zoom feature you will know exactly what you will be getting. The four 8 X 10 black and white photos are mint.

Now, the two programs have some mild wrinkles and stuff going on as would be expected for 66 year old thin paper programs. The misprinted Albun program has a tiny tear on the back side in the autograph section of maybe 1/2 inch at best. Otherwise, these programs are the best I have ever seen. Because like I already said, I love real and pretty!

I want to thank you for being an Elvis fan and looking at my auctions. Should you have any questions or want additional information, please, reach out to me. This item is in the category "Entertainment Memorabilia\Music Memorabilia\Rock & Pop\Artists P\Presley, Elvis\Other Elvis Presley Mem". The seller is "elvisfan1957" and is located in this country: US. This item can be shipped to United States, Canada.