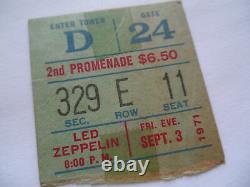 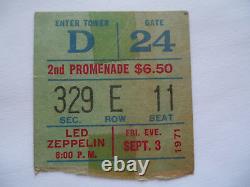 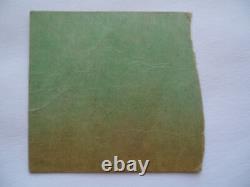 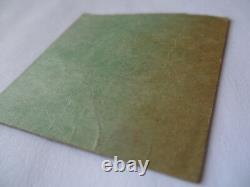 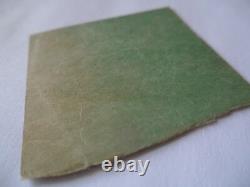 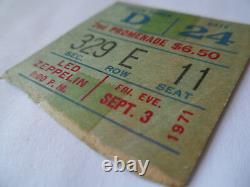 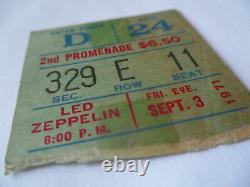 This is a really nice LED ZEPPELIN stub. Sept 3rd 1971 at the Madison Square Garden. This is a very early tour. Unlike 1975 and especially 1977, these early ticket stubs are much harder to find. What a super nice find! In vintage original items guaranteed authentic. Immigrant Song, Heartbreaker, Since I've Been Loving You, Black Dog, Dazed and Confused, Stairway to Heaven, Celebration Day, That's the Way, Going to California, What Is and What Should Never Be, Moby Dick, Whole Lotta Love medley incl. Let That Boy Boogie, My Baby Left Me, Mess of Blues, You Shook Me, Communication Breakdown, Organ solo / Thank You, Rock and Roll.

Article from show a few days earlier on August 31st. The Sights & Sounds of Led Zeppelin In Concert Heavy. Led Zeppelin has come and gone at the Orlando Sports Stadium, and like the lead man blurted over the din of thousands of wildly cheering voices and clapping hands, Man, I dont believe this place.

It was, in a word, unbelievable. And in another, perhaps more acceptable word, heavy very heavy. The youths universally and collectively long-haired, bell-bottomed, braless hot panted, haltered and Hang Ten began arriving with blanket rolls and seat cushions as early as five oclock to find choice sears for a show still three hours away. Or close to starting time as any rock group ever has gotten, the house lights went out and Zeppelin exploded into life in a pink, purple and yellow electric haze and magnetized the audience. There was no second group on the billing to fill the gaps, because there were no gaps.

Zeppelin and Zeppelin alone gave their audience two and a half solid hours of unremitting rock in one of the most professional rock shows weve seen. No light show, very little talk just music. Too often, audiences are disappointed with their favorite performers when they hear them live. Some groups just cant cut it in a live performance, depending on complicated electronic studio mixing to make tapes and records sound good.

They are good by themselves and powerful. They ripped through their greatest hits, including Whole Lotta Love and Living Loving Maid?? , and the moving drum solo on Moby Dick went on for at least 15 minutes. Zeppelin gave a well-timed presentation, leveling off around 9pm from their initial burst of energy, then coming back for a long and strong finale of selections that recaptured the crowd immediately and held them to the end. V=CPn7pivy_-c Live clip from a few months earlier playing'Rock and Roll' 4 min. V=BmTZ-JnPxUE Live clip from a few weeks later playing'Going to California' 8 min.

V=ZyDMiRKbsuM Live clip from a few weeks later playing'Whole Lotta Love' 10 min. Please leave me a good positive comment so that I know you received your item and everything is fine, I will reciprocate. Thank you for shopping at ClaudeUSA. The item "LED ZEPPELIN 1971 Original CONCERT TICKET STUB Madison Square Garden, NYC" is in sale since Saturday, March 23, 2019.