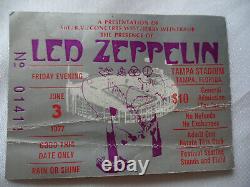 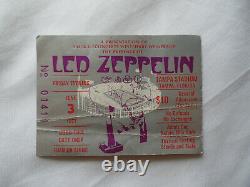 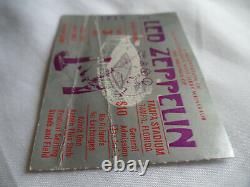 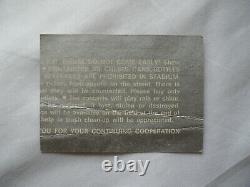 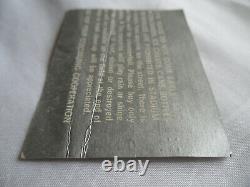 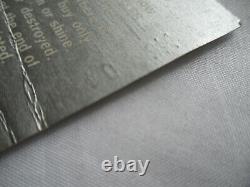 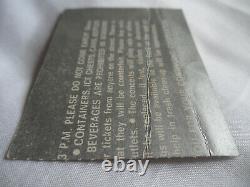 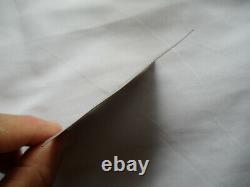 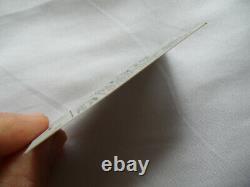 This is a rare LED ZEPPELIN. 1977 show at the Tampa Stadium. Here is one of the best looking Zeppelin tickets. These are very hard to come by, which would normally seem surprising considering there were 70,000 people at this concert.

But, unfortunately, a huge thunderstorm started about 20 minutes into the show and really messed things up. The band ultimately decided to cancel the show as there was lightning and the rain wouldn't stop, apparently the band was fearful of electrocution. This upset the crowd, as this was a rain or shine event. Then, after the police started to tell everyone to go home and even had to use tear gas, things became quite rowdy and menacing.

That's one reason why there are so few of these stubs, and when you find one, it is usually all rumpled and worn!! Hence why so few stubs are around. Although it is a great looking stub, most fans opted for the cash! From that point forward, the City of Tampa withdrew all applications to concerts at Tampa Stadium for 3 years after this show (and not too long after they torn the place down). That was too bad, this venue was great for shows and had some of the best looking concert tickets around.

If not for that storm, we would have had many more shows and great looking stubs! Anyway, this stub is in EX condition with 2 lengthwise creases and very lightly rumpled but otherwise very minimal wear. So overall in excellent condition. Out of the few stubs left from this show, most are quite worn and wrinkled.

It's really hard to find better. In original vintage items guaranteed authentic. This was an outdoor show held at the Tampa Stadium in Florida in June 1977. If you have ever heard the live audio of this show, it was a great start to the 10th show on the 2nd leg of the US tour.

There were 70,000 fans in attendance. After they played The Song Remains the Same, Sick Again, and Nobody's Fault but Mine - the show was stopped and soon thereafter a riot erupted with the fans and the police. News Report: At Least 100 Injured At Led Zeppelin Concert TAMPA Fla.

City officials, reeling from a mini riot which erupted when a thunderstorm washed out a Led Zeppelin concert, canceled a rain check rerun Saturday, leaving fans from as far as Michigan and New York holding "rain or shine" ticket stubs. "If I were in Buffalo, I'd go home right now, " said Bonnie Strickland. The 19-year-old youth and three companions had driven 24hours to get to Florida for the concert. Strickland said they were the first ones in the stadium when the doors opened at 11:30 a.

Friday for the8:30 p. After spending the day in 90-degree weather on the sun baked football field, they settled down for the concert. The British band played for 20 minutes before the thunderstorm hit. About 45minutes later the concert was called off. The cry We want Zeppelin.

We want Zeppelin came from the 70,000 fans as rocks and bottles began flying onto the stage. We had what had to be called a small riot. There were between 3,000 and4,000 people who were unruly and disorderly, Tampa Police spokesman Johnny Barker said. About 250 police officers, all in riot gear and using billy clubs, broke up the rioting and herded the fans out of the stadium. The scene was followed by 26 reported traffic accidents near the grounds.

"The cops didn't give any warning, " one teen-aged girl said. I ended up at the bottom of the crowd and a cop kicked me in the head.

My brother got a broken leg and broken ribs. The melee left an estimated 100 fans with injuries. Shift Commander Tom Wilson said "in the neighborhood" a dozen officers were treated for injuries.

One had a concussion, there was one with a broken hand, one with a broken ankle, one with cut lips and some teeth knocked out, one with a dislocated shoulder... " There were so many people you just couldn't move, " a 32 year-old man from West Palm Beach said: I was just trying to get away.

White Summer / Black Mountainside. (Out On the Tiles intro).

Here's a 1979 2hr40 min Super HQ full show when they were at the top of their game. Go to YouTube and paste in: Led Zeppelin: Knebworth August 11th, 1979 Here's the London reunion show in 2007 (Professionally shot in 720p): Go to Youtube and type in: 2007 Led Zeppelin London reunion show. Please leave me a good positive comment so that I know you received your item and everything is fine, I will reciprocate. Thank you for shopping at ClaudeUSA. The item "LED ZEPPELIN 1977 Original CONCERT TICKET STUB RIOT SHOW Tampa, FL EX" is in sale since Tuesday, May 18, 2021. This item is in the category "Entertainment Memorabilia\Music Memorabilia\Rock & Pop\Artists L\Led Zeppelin\Concert Memorabilia". The seller is "claudeusa" and is located in Orlando, Florida. This item can be shipped to United States, all countries in Europe, Japan, Australia, Canada.