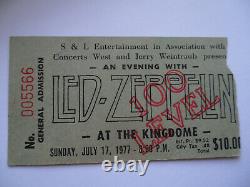 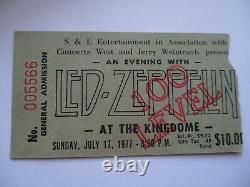 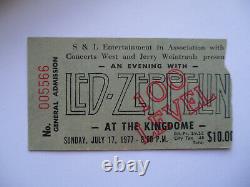 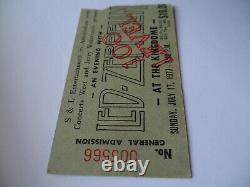 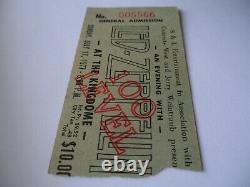 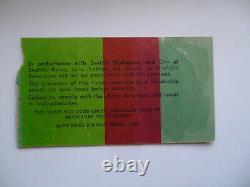 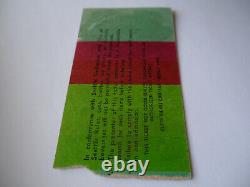 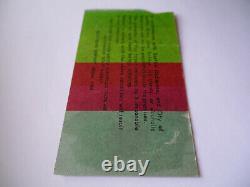 Here's a super nice LED ZEPPELIN stub. From July 17th, 1977 at the Seattle Kingdome. Almost no other Led Zeppelin tickets show the band's trademarked name logo on the ticket, and none shows it in such prominence as the 1977 Seattle ticket does. That makes this ticket one of the best looking ones out there.

The Seattle box office made the band name stand out big and in style, and not focused on the typical but irrevelant venue details, which was a rarity. This stub is super nice, not only that it's in awesome shape but that it is very rare to get almonst the full ticket back from the usher. The ticket holder likely asked or prodded the usher to tear as little as possible and was fortunate to get a nice attendant willing to comply maybe a tip helped!

This did not happen often and you very rarely see the whole band name on this stub. They were rushed and usually tore it right down or close to the middle. It measures approx 2 x. In original vintage items, guaranteed authentic. Photos by Neal Preston (morrisonhotelgallery.

The Song Remains the Same. Nobody's Fault but Mine. In My Time of Dying. Since I've Been Loving You. White Summer / Black Mountainside. (Out On the Tiles intro).

Here's a review of this show from the official Led Zeppelin Website: Review: 62,000 Led Zeppelin Fans Jam Kingdome. They came at night by the thousands, some waiting for two days in the rain and cold for a chance to have their ears assaulted and nerves numbed and to say they saw Led Zeppelin. It was a night of pot, pills and popcorn with the popcorn coming in a close third to the other two. But overall, the Led Zeppelin concert at the Kingdome came off without too much trouble. There were several arrests, lots of dope and booze smuggled in either under coats or inside bodies and some very sick kids from drinking too much.

It's not a bad bunch considering the number of people here, one Seattle police officer said of the 62,000 people, and considering the reputation of the group. Led Zeppelin has earned a reputation for attracting surly crowds which generally fight and riot.

At 4:30 yesterday afternoon, the 20,000 or so Zeppelin fans waiting at the Kingdome started to chant, We want in, we want in. Suddenly a movement rippled through the crowd like a wave pushing the front-line troops into the fence.

The item "LED ZEPPELIN Original 1977 CONCERT TICKET STUB Seattle EX+" is in sale since Tuesday, February 9, 2021. This item is in the category "Entertainment Memorabilia\Music Memorabilia\Rock & Pop\Artists L\Led Zeppelin\Concert Memorabilia". The seller is "claudeusa" and is located in Orlando, Florida.