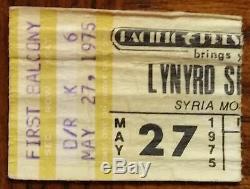 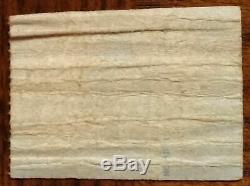 Not accepting offers on this item. Please check out my other auctions for more rare concert ticket stubs/music magazines from the 70's/80's. Old concert ticket stubs are some of the most sought after items amongst Lynyrd Skynyrd fans and collectors.

This concert ticket stub would make a great collectible for any Lynyrd Skynyrd/Ed King fan or collector. Don't miss out on this rarity. Ticket stub measures approximately 1.50" by 2.00". Ticket stub has noticeable creasing as you can see from picture. However, everything is still legible on ticket stub.

Also, there is no writing or tape residue on ticket stub, either. The item "LYNYRD SKYNYRD-Ed King-1975 Concert Ticket Stub (Pittsburgh-Syria Mosque)" is in sale since Sunday, August 23, 2020. This item is in the category "Entertainment Memorabilia\Music Memorabilia\Rock & Pop\Artists L\Lynyrd Skynyrd". The seller is "pjcas" and is located in New Kensington, Pennsylvania.