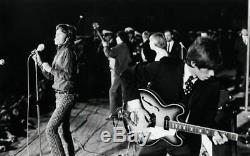 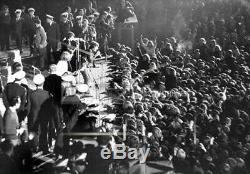 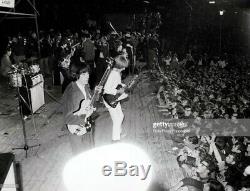 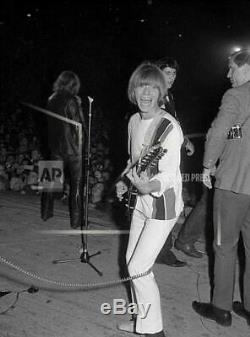 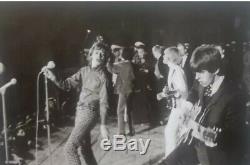 ROLLING STONES 1965 Berlin Ticket Stub Historic and Wild Concert Waldbühne. This is a rare, historic Stones ticket with a great background story. The Stones toured West Germany in September of 1965. It included concerts in Münster, Essen, Munich, Berlin, and Hamburg. The tour was preceded by alarmist reports about the Stones reputation, on the one hand, and events linked to their concerts abroad, on the other. In Ireland, fans had invaded the stage; it transpired that during their tours in the United Kingdom, the band nicknamed the Wild Ones of Beat travelled in windowless vans along secret routes as though on a military operation. In Blackpool in England, in Belfast in Northern Ireland, in Halsingbord in Sweden, and in the American city of Lynn, incidents had taken place leading, in some cases, to the intervention of police dogs and police officers armed with water cannons.

German newspapers described the band as "five young men with their hair longer than a girl's, playing primitive music". The Berlin police took precautionary measures, with 357 police officers, 12 mounted police and 30 dogs. There were a lot of conflicts between fans and the show management along the way. German fans who couldn't get tickets threw eggs, tin cans and tomatoes at police, who, in turn, responded with force, using batons and making arrests. Stones concerts incited riots at the time, but this one in Berlin was an extreme example.

This was the second gig of the tour, and took place at the Waldbühne-Berlin, an open air venue which had been the site of several of Hitler's speeches. Two German bands opened for the Stones. Around 9:10PM, the atmosphere started to become heated. The first firecrackers were thrown, along with some objects including shoes and underwear. According to one press report, the stage was littered with orphaned pieces of lingerie.

The Stones opened with "Everybody Needs Someone to Love", the Solomon Burke soul hit. Chaos starts, the fans are crowded together and the air was stifling. Some fans tried to climb onto the stage, which forced the Stones to retreat to an underground bunker while the police tried to restore order.

The young bands repertoire was still limited and the concert was not scheduled to last more than half an hour anyway, but, as the police report concedes, the end of the show was more than premature for some of the fans, who were in a state of complete ecstasy. It didn't help that the Stones manager, Andrew Loog Oldham, had suggested that Mick do some goose-stepping, and then Brian started in with a Nazi salute. Like they needed something else to incite the fans. The lights were turned off at the end of the concert and the fans became upset and started rioting.

4,000 of the 21,000 fans in attendance caused extensive damage to the concert venue, destroying 20,000 seats, stage lighting and equipment. There were over 300 arrests. 77 fans were injured and 28 fans and 6 police were hospitalized. A subway train car was destroyed and automobiles overturned. The destruction started a national debate on "beat music". The Berlin Chief of Police asked to ban all "beat music" concerts.

It was many years before the Waldbühne-Berlin was able to host a rock concert. Ticket measures 5" x 2 1/4". Accompanying photos are for illustration purposes only! Listing is for ticket stub only! Exceptions are the more expensive items.

The item "ROLLING STONES 1965 Berlin Ticket Stub Historic and Wild Concert" is in sale since Wednesday, January 22, 2020. This item is in the category "Entertainment Memorabilia\Music Memorabilia\Rock & Pop\Artists R\Rolling Stones\Concert Memorabilia". The seller is "mainbrain" and is located in Dallas, Texas. This item can be shipped worldwide.