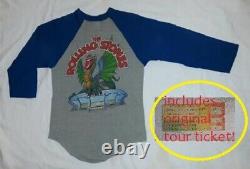 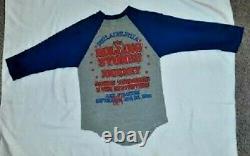 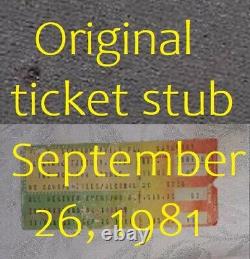 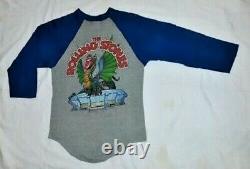 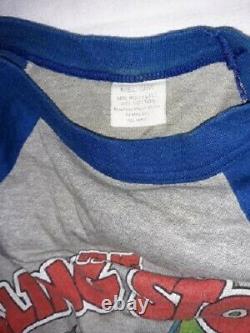 RARE ORIGINAL AUTHENTIC ROCK TOUR T-SHIRT w/ DATE & CITY. NO ISSUES THIS IS CLEAN AND CLEAR 2 SIDED CLASSIC! The front has the name of the band in red, a large dragon, with the iconic Rolling Stone lips, standing over Philadelphia's iconic (now long gone) JFK stadium. The back of the shirt has the name of the band at the top, with the opening bands, Journey and George Thorogood and the Delaware Destroyers, in red.

The dates (September 25/26) and the name of the stadium are below. Colors are bold and bright. No holes, runs, spots or tears. No odors, non-smoking no pets (sadly allergic). Ticket also in very good vintage condition, almost 40 years old and but a few scratches; see pics. Would make a great addition to your collection, be cool to wear to school, work, your next on-line Zoom or conference call, your next concert If there will ever be any! , or just to own and let the rarity and value rise. Dated tour shirts from vintage 80s and 90s Classic Rock bands have skyrocketed in value due to them being cool, rare, wearable, and collectible. Owning a great Rolling Stones Concert Tour Shirt from 1981 would be very cool.

Here are the Shirt details. Tag Size as Medium and it measures. 17 inches flat across the. Material: Feels like Cotton nice quality but on tag states 50% Polyester 50% Cotton. Length Measured from the back of the Neck to the center of the curved Hemline is 26 inches.

Sleeves: This is an old-school'baseball'/raglan-style (diagonal color block) ¾ sleeve shirt. Long but not full length sleeves measuring from underneath the pit to edge of sleeve 17. Design: 2 Sided Band name and Dragon on front, Bands, Dates location on back. Accounts of the concert publicly available detail the Stones kicking off their 1981 Tattoo You tour with 2 shows at Philadelphia rock stronghold JFK Stadium. Over two hours of the UK's greatest rock and roll shook Pennsy through 26 songs, starting with a turbocharged version of Under My Thumb. Are live performances like Mona, Tops and Down the Road Apiece mesmerized Philly fans though they didn't remain on the setlist.

Thoroughly Good George,' George Thorogood and the (Delaware) Destroyers opened with their old-school rock, followed by Journey. We didn't know we were making history, we thought we were making music. These iconic sounds of the eighties are now considered classic rock, it's only rock and rollbut we like it, like it, yes we do.. We also have AN INCREDIBLE Stevie Nicks Wild Heart Tour short foorm 1983 listed, also with original ticket stub PLUS tour pin and bonus Crystal Visions tour ticket stub so check out our other listings! The item "ROLLING STONES Tshirt 1981 TOUR PHILADELPHIA Ticket Stub ROCK CONCERT Openig Nit" is in sale since Sunday, December 13, 2020.