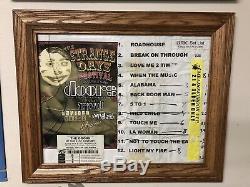 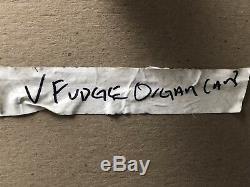 Went to see Doors if the 21st century including original Doors members Ray Manzarek and Robby Krieger. Venue was in Gilford NH at Meadow Brook. I was extremely lucky to have been given this set list by Ray Manzarek himself!!! Because while in the front row I called out his name and cheered faithfully the entire show.. It was laying on the floor next to his Keyboard set up front with Ian just floating around, krinkled and stuff because Ray Manzarek handled it himself..

During this show, as prompted by my cheering he started playing the keyboards with his feet. After the show it was a meet and greet where I expressed my Love for the Doors and gave Ray a hug and shook Robbie Kriegers hand. Ian Astbury did a remarkable job as Jim Morrison on stage. This Item is the real deal, I even have the organ tape from the opening Band Vanilla fudge from that day...

This was the Absolute best concert I had ever been to in my entire life!!! Ian Astbury mentions on stage that Jim is looking over us, and would be happy that the crowd was there... Robbie held his guitar up and was completely stoked! The item "The Doors 21st Century Concert Set List, Concert Ticket Stub, Wrist Band" is in sale since Wednesday, October 24, 2018. This item is in the category "Entertainment Memorabilia\Music Memorabilia\Rock & Pop\Artists T\Other Rock & Pop Artists T".

The seller is "barter_kings" and is located in Hampstead, New Hampshire. This item can be shipped to United States.