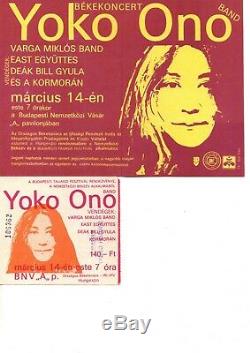 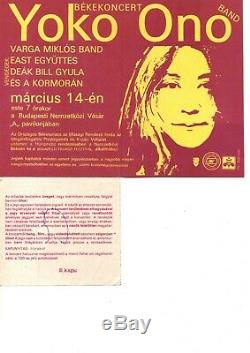 IN BUDAPEST CONCERT : 15,000 HUNGARIAN FANS GIVE YOKO ONO A CHANCE. Hungary All Yoko is still saying is Give peace a chance. Its a theme she stressed repeatedly during her concert here Friday night--the 10th stop in the singer-songwriters first tour since her husband, John Lennon, was slain in 1980. As John said, we can make it (peace) together. Together is the secret, she told 15,000 people in the International Fairgrounds hall, a bare, stark room the size of a football field normally used for cultural or consumer exhibits.

Because so few people in this Eastern Bloc city know more than a smattering of English, those words--and other song introductions--were translated into Hungarian by an interpreter. But one point near the end of the 80-minute concert needed no translation. As the keyboardist in Onos band began Lennons most famous song, Imagine, the audience reacted with an intensity that seemed almost cathartic.

Onos decision to sing Imagine and Give Peace a Chance (another song strongly identified with her late husband) will probably fuel the resentment of pop fans who have accused Ono of trying to build her career on the lingering affection and respect for Lennon. But the audience here appeared grateful to join in what became--in a haunting, deeply moving way--a memorial to Lennon.

The item "Yoko Ono Band Peace concert EAST Block Hungary 1986. 03.14 ticket stub" is in sale since Tuesday, August 4, 2020. This item is in the category "Entertainment Memorabilia\Music Memorabilia\Rock & Pop\Artists X-Z\Other Rock & Pop Artists X-Z". The seller is "deridefort" and is located in Hessen.